There is a poetry to everything. The drone of an unseen aircraft in the drift of a sunny afternoon is a poem. A human mind is there to receive it, a heart beats and eyes take in the infinite blue. Between each push of pulse there is that pause of possible death, postponed by the next beat, the next turn of the crankshaft, the next opening of the inlet valve.

Among the scream of the Formula One engines it is a job to compose poetry. Yet there are far more similarities between the two activities than you would think. Both require a complete lack of self consciousness. Both attract groupies. Both attract some fabulously odious beings who have disappeared so far up themselves that their artistic integrity is interfering with their lap times.

This lunch-time as I watched the practice for the Abu-Dhabi Grand Prix, I was tempted to float the idea of the Petrol Head School of Poetry. So far no one has required poets to wear overalls, baseball hats, pink lens sunglasses or over tight white trousers. All the same, most meetings of poets will display a smattering of silly hats, scarves worn with vests, tiny specs perched on the ends of noses and inordinate competing egos. If international banks or purveyors of fizzy drinks offered to sponsor poets I can assure you there would be a stampede of stanzas to win the prize.

I shot an arrow in the air

It traced the name of Santander

Now come on – that’s gotta be worth a pair of poet’s overalls or at least a baseball cap. If any of you guys can come up with some F1 verse in the ‘Comments’ below, I will publish it on here and do my best to get it to Bernie Ecclestone. I rather fear that it will go over his head. But to me the real point of contact between the two worlds is that of the complete absence of that sense of the absurd that keeps most folk paying the mortgage and shuffling along head down. Watching the GP circus poses the same question as writing poetry. What is it for? The good thing about poetry is that it doesn’t try to sell you anything and very few people read it. Almost no one buys it, not even poets’ mothers. Millions watch as super star drivers tell you that their under-steer did not allow them to operate their drag reduction. Oh how I would love to speak to camera as crowds of women huddled round their screens to announce that my assonance was blanking out my verse.

I doubt there will ever be a Pit Lane Laureate. One thing is for sure. Poetry will be written long after the last car has passed the last chequered flag. And no-one will read it.

Join the ‘SUCK IT UP CLUB’ 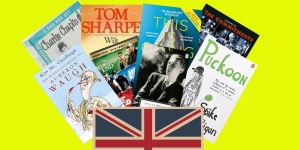 Find me on Amazon